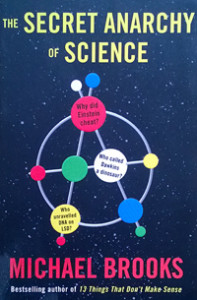 The character of Walter Bishop in TV’s ‘Fringe’ was a wonderfully played mad scientist. Alternately kindly, callus, inquisitive and ruthless. A man who’s mind connected to everyday reality the way a skipping stone connects to water, he was addicted to a variety of psychotropic substances, talked to cows and did his best work while on recreational hallucinogens. Not at all like the real, conscientious, white-coated purveyors of distilled truth we know professional scientists to be.

However, if we are to believe Michael Brooks, it would seem that scientists, even the greats (perhaps especially the greats), have a lot more in common with Walter Bishop than the ‘monks of our time’ image many would like to project. OK, maybe not the talking to cows part, but everything else.

I mean, it’s almost understandable that scientists would quaff down slurries of bacteria, infect themselves with parasitic worms and engage in a little light DIY heart surgery to test their theories (incidentally, unless you have a strong stomach, this chapter does not make good after-dinner reading… or before-dinner reading come to that) but who would expect that;

Real doctors would deliberately leave syphilis untreated in 400 men to see how it progressed?
Answer: the US public health service from 1932 to 1972.
Great men would fudge the figures to support their theories then wield their reputation like a cudgel to silence opposition?
A: Einstein, Galileo, Newton and a long (long) list of other notable names.
Major scientific advances would come from dreams, mystic visions or LSD?
A: Einstein (again) Girolamo Cardano, Tesla, Francis Crick.

Brooks presents us with a parade of household names of the great and the good – and sometimes the undeservedly obscure – past and present. Sciences’ ‘secret anarchists’ who’s stories often read more like some biblical prophet than rational men of careful hypothesis and measurement. There’s another biblical parallel to be drawn too. Often these secret anarchist will struggle through the scientific wilderness for years while orthodoxy ignores or silences their revelations before returning in triumph to establish a new orthodoxy.

Usually that means a fight.

That the ‘scientific method’ is more honoured in the breach than the observance is not itself a new concept. Brooks quotes Carl Sagan who wrote of ‘the roiling see of jealousies, ambition, backbiting, suppression of dissent and absurd conceits’ in scientific fields. Something Sagan was familiar with as his first wife, Lynn Margullis, was one of the greatest pugilists.

Her work was on endsoymibiosis – the symbiotic relationship bacteria play in our cells. It wasn’t an original idea but unlike earlier researchers, she didn’t give up after the first 15 rejections of her research paper. She fought – and fought dirty in the eyes of the scientific establishment by writing a book– until she was proven right. Richard Dawkins referred to her work as “the greatest achievement of 20th century evolutionary biology”.

In fairness to the naysayers, Brooks does point out that the scientific underdog is not necessarily truth’s struggling champion. With the gift of hindsight, we can see that Margulis’ work was unfairly dismissed and her refusal to follow the rules justified. But later she supported Donald Williamson’s theory that caterpillars and butterflies are separate species that somehow merged and contended that HIV does not cause AIDS. How much credence would you have given her ‘crazy’ ideas? More importantly, if you controlled the purse strings, how much money would you have given her research?

So here are our scientists as Brooks entertainingly and insightfully presents them; heirs of the Enlightenment, brilliant and bull-headed, petty and patrician in equal measure. More human and fallible than they would like you (or funding committees) to think but perhaps more engaging and engageable for that.