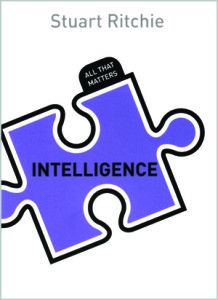 ‘Smart guy’ is usually synonymous with ‘bad guy’ in popular culture unless they’re Doc Brown buffoons or Doc House jerks. Barring the odd Hawking or Einstein there seems to be a general social antipathy to intelligence which is somehow seen as threatening unless it’s hobbled with humor or defeat. The cultural conditioning starts early – even the Mr. Men’s, Mr. Clever is shown as an arrogant snob constantly taken down a peg by the ordinary Joe. “IQ tests just tell you how good you are at doing IQ tests. They don’t measure anything real like emotional intelligence” is a conversation many of us have had. Wouldn’t it be useful to have a few handy facts to counter the rote antagonism and political correctness? Well you’re in luck! ‘Intelligence’ by Stuart Ritchie, Cognitive Epidemiology researcher at the University of Edinburgh, is just what you need.

‘Intelligence’ actually looks for all the world like a ‘Mr. Man’ book. So much so that I thought at first the cover designers were poking fun at the content. However, it turns out that it’s one of 30 books in the similarly designed ‘All That Matters’ series. Like it’s stable mates, ‘Intelligence’ condenses the current research on the subject into a short and very readable book. Sort of the ‘Cliff Notes’ for IQ.

In six clear chapters the author delves into intelligence – what it is, what it isn’t, why some people have more of it that others and a little on what to do about that. The answers are: biological, emotional & genetic respectively for the first three. That last one is a stickler though. We know of a couple of genes that can cause impairment if they are knocked out, but we don’t know which ones confer intelligence. It appears to be a cumulative effort – lots of small input from a whole bunch of genes. Education helps a bit but whether that’s a reverse correlation of smart people simple being in school longer is open to debate.

After a brief introduction of the development of the very idea of general Intelligence or ‘g’, Ritchie covers the chequered (and occasionally downright dark) history of intelligence testing and throws in some diverting sample questions. For goodness sake don’t do the ‘think of alternative uses for a brick’ one though – you’ll be there all night.

Ritchie manages to shoehorn a lot into a small book. He debunks the Mozart effect and its brain-training ilk. He outlines the drawbacks and benefits of intelligence and what parents can do to help develop it (not much) and explores it’s correlations with jobs, health and mortality as well as touching on IQ differences in gender and, more controversially, race.

He also covers the Flynn Effect – the intriguing finding that IQ scores worldwide have been increasing at a steady rate of 3 points per decade (faster in developing countries). Notwithstanding the evidence of reality TV, the rise is quite well established across a broad range of tests and geographical locations. The effect seems at odds with what we know about history though. Run the curve backwards and pretty soon everybody’s great-to-the-X grandparents would not only have been too dumb to tie their shoelaces, they’d probably have tried to eat them. Clearly this was (mostly) not the case though I’m not sure that the ‘just-so’ explanation of education giving us all – in James Flynn’s phrase – ‘scientific spectacles’ is wholly convincing.

Inevitably there are a lot of things not covered but it would be churlish to harp on the absences in so brief an overview. Richie does list a selection of further reading books and papers on the subject (along with some anti-IQ books for balance) so there’s plenty of opportunity to explore the subject further. On it’s own, ‘Intelligence’ is a short, sharp, myth-busting guide to smarts for the good guys.