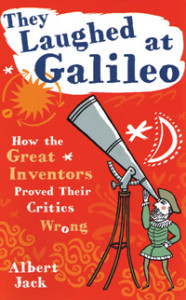 They Laughed at Galileo
How the great inventors proved their critics wrong
by Albert Jack.
Published by Constable & Robinson Ltd. www.littlebrown.co.uk

Innovation is a dangerous game. An early example here is just how many people have jumped off tall buildings to very nearly invent the parachute. Flight, radiation and submarines have equally obvious dangers but even more mundane items have proven ironically fatal. The moveable press mangled it’s creator in the gears, the man who put lead in petrol was strangled by a pulley support while bedridden from lead poisoning and the inventor of the lighthouse was washed out to sea.

“The only way to discover the limits of the possible is to venture a little way past them into the impossible” said Arthur C. Clarke. With dozens of entries covering everything from penicillin to Worcestershire Sauce, Albert Jack’s ‘They Laughed at Galileo’ is filled with stories of people who did just that – innovators who risked penury, ridicule and – as above – sometimes their lives, to steadfastly swim against the tide of expert opinion.

There are plenty of tales of noted failures like Churchill (fired), Edison (fired twice), Lincoln (defeated), Woolworth (went out of business), Disney (bankrupt) and J.K. Rowling (multiple rejections). Entertaining as these stories are, I’m not entirely sure I’d trust the providence of all of them. For instance, the general consensus is that IBM chairman Thomas J. Watson’s “world market for five computers” quote that Jack repeats is apocryphal. Still, reality is often more complicated and less entertaining so I’m happy to consider the stories here true enough for the purposes of the book. And Jack does restore the reputation of the legendary king of bad decisions, Dick Rowe, ‘the man who turned down the Beatles’. It turns out Rowe’s judgment was actually pretty sound as he did manage to sign Van Morrison, the Moody Blues, Tom Jones as well as the Animals and even Beatles producer, George Martin later said he would never have signed the group based on their ‘morning-after-the-night-before’ audition tape. Potential authors and directors will doubtless be encouraged by the list of equally damming but less famous rejections bestowed on now classic works.

So, what drives success? Is it determination – Churchill’s “Never, never, never give up”? Is it desperation – Rowling’s “Had I succeeded at anything else I might never have found the determination to succeed (at writing)”? Actually, it’s mostly luck.

There’s a chapter devoted to purely accidental discoveries such as saccharin, safety glass and penicillin (all from poor lab hygiene), coca cola (an attempt to kick morphine addiction) and popsicles (an 11 year old’s strict dinnertime). But what becomes clear when reading about the inventions in “They Laughed at Galileo” is how very nearly they weren’t. Even ideas that people worked on doggedly for years hang by the thinnest thread of chance – time and again determination and brilliance yielding to serendipity. Elisha Grey’s lawyer stopped for lunch on the way to the patent office so allowing Alexander Graham Bell’s lawyer to file two hours earlier. The man who invented Post-Its took ten years to make the hindsightly obvious connection of putting his re-useable glue discovery on the back of notepaper. You write on those with a Biro not a Lord because the original ballpoint pen inventor listened to the experts.

The thing that most struck me with ‘They Laughed at Galileo’ is that the ideas in this book must surely be the tip of the iceberg – the ones that succeeded. How many, many others must have been ignored or forgotten throughout history because their inventors were slightly less obsessive or just not quite in the right place at quite the right time? After reading this book you’ll probably be inspired to dust off that half finished manuscript or revisit that shelved ‘big idea’. Maybe your parachute will open, maybe it won’t, just, you know…try small buildings first.