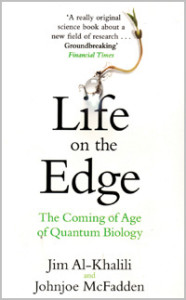 Life at the Edge
The coming of age of quantum biology
by Jim Al-Khalili and Johnjoe McFadden
Published by Transworld www.transworldbooks.co.uk

Did you know a bear’s sense of smell is seven times more sensitive than a dog’s? This is one of the little side-notes in “Life at the Edge – the coming of age of quantum biology”. However, without an intimate connection between biology and quantum physics say physicist and professor of biology Jim Al-Khalili and Johnjoe McFadden, the bear wouldn’t have any sense of smell and most likely wouldn’t be alive at all.

Quantum physics isn’t rocket science or brain surgery, it’s much harder than that. Human minds just aren’t designed to easily accommodate an object being in two places at once or spinning in opposite directions simultaneously. Marrying this field to the unlikely bedfellow of life sciences to produce Quantum Biology does little to simplify things. The authors do the best they can. They have clearly dumbed down the subject as far as practical and they (over) stuff the book with metaphor, illustration and anecdote but it can still be difficult to keep your thylakoids and your chloroplasts straight.

The essence of Quantum Biology is the aforementioned superimposition. The ability of quantum objects to be in several states at once. Computer researchers take great pains to supercool individual atoms to almost absolute zero to prevent ‘decoherence’ – basically stopping their atom from bumping into anything – so the suggestion that such superimposition states can be maintained in the hot, messy chaos of living cells was originally, and literally, laughed out of the room by physicists.

Quantum biology has some a long way in a short time but is still far from mainstream. There is a solid base for believing enzyme activity, photosynthesis and migration navigation is based on quantum superimposition. A quantum sense of smell is well argued for but beyond that the arguments become more speculative. The authors make an intriguing case for the necessity of quantum effects in the origin of life and the process of consciousness but the evidence isn’t there yet.

It’s hard to tell the new from the nonsense with ideas this unorthodox. Quantum Biology could be paradigm changing, it could be a flash in the pan. In future ages (you know, the next decade or two) folk may marvel in horrified fascination at our current barbarism. “People drove their own cars! They murdered animals for meat instead of growing it in factories! They had no idea that life and consciousness is a quantum phenomena! How charmingly naive.” If that does turn out to be the case, remember, you heard it here first.