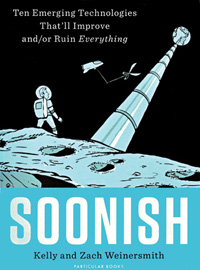 The brain as a giant ball of cats is the image that stays with me most strongly upon finishing “Soonish – ten emerging technologies that’ll improve and/or ruin everything” by Kelly & Zach Weinermith. Some of you may be familiar with the authors’ webcomic (www.smbc-comics.com) or podcast (www.sciencesortof.com). In ‘Soonish’, the Weinersmiths brings the same brand of lighthearted philosophical science humour – and cartoons – to bear on a bunch of emerging technologies.

For all it’s clowning, ‘Soonish’ is a refreshing, level-headed antidote to the breathless hype of press-release, pop science articles. The authors delve into the intricacies of each of the ten topics on offer here (without getting too technical), talking to the scientists working at the coal-face of discovery and outlining what could go wrong, what could go right and how far along we are to either of those outcomes. Of course, these are, as advertised, emerging technologies, so the usual answer for everything from space elevators to bioprinting is ‘not as far as we’d hoped’. Some of the science may live up the promise but in a period of time probably much longer that you’ve hoped/dreaded – more ‘ish’ than ‘soon’ (except maybe for Crisper gene editing which really could feck/fix things up in the near term). In science, a lot of promising research never pans out and sometimes what seems like a good idea isn’t. ‘Soonish’ is pretty much a textbook on managing expectations. Space will remain expensive, super strong bionic replacements for your feeble human limbs are not on the cards and you won’t be 3D printing a new liver from your stem cells any time soon (best put down that Margarita).

Beyond science sensationalism, the Weinersmiths uncover a world of real human scientists (often with cool names you could never get away with in fiction – Skylar Tibbits, David Duff with his bucket of stuff, Dr Elvis) making amazing advances and discoveries while facing what might turn out to be insurmountable problems. Along the way are fascinating asides like the Canadian rocket scientist assassinated by Mossad, why you breath through one nostril at a time, a scheme for an ethical transplant organ market and why your dog can get a vaccine for Lyme disease but you can’t.

The authors have kindly invited critics to come alone to their dark basement where they have promised snacks. I’ll be happy to accept a cookie by post – which will immediately be placed in a sealed, sterile environment and destroyed by fire (one of the authors is a brain parasite researcher. Fool me once…). Despite the mortal threat to mild mannered book reviewers I should mentions some minor caveats.

In the chapter on augmented reality the authors lament their sources talking up the already defunct Google glass but go on to use the almost equally defunct Pokamon Go as an example of what AR can do (incidentally, you can try out a bit of AR yourself by downloading the Soonish App that sprouts a little animated orbital tower from the book’s cover). Experienced armchair scientists might balk at the Sesame Street level explanations of ideas such as fusion, DNA replication and neurology that open each chapter and some of the metaphors are a bit strained (except for the aforementioned giant ball of cats which is bang on). I only spotted one factual error (p31) about a space tether being in orbit. Still, they correctly point out that it’s only the geosynchronous part that has orbital speed by the end of the chapter so I’ll maybe give them a pass here.