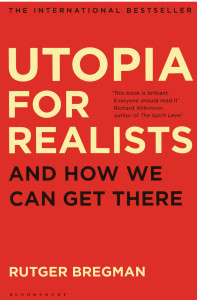 Utopia for Realists
by Rutger Bregman
Published by Bloomsbury www.bloomsbury.com

“Progress is the realisation of Utopias”
Oscar Wilde

Don’t let the slightly tree-huggerish title of ‘Utopia for Realists’ put you off. There are crazy ideas here but – based on historical data, field trials and research – they are crazy idea that just might work. Author Rutger Bregman starts off by reminding us that we already occupy, with our unlimited, food, drink, warmth and medicine, what passed for a medieval Utopia. Of course our Utopia is riddled with problems those old dreamers never conceived of. The biggest problem for Bregman though is that our expectations of what we can achieve as a society have become ‘dramatically eroded’. As a society, says Bregman, we have lost the ability to imagine real change and have much of our reward system backward. Being paid a lot of money doesn’t make you important while being important doesn’t mean you’ll be paid a lot of money. A 9 day refuse strike brought New York to its knees while a three month bank strike hardly fazed Ireland.

Even the people making the money seem aware of the absurdity. “The best minds of my generation are thinking about how to make people click ads”, says a Facebook employee while a stockbroker tells him “I’d like to do something genuinely useful but I can’t take the pay cut.” Half the responders to a Harvard Business Review survey claim their job has no meaning or significance.

So, what’s to be done? It’s not that we don’t have solutions that have been shown to work. Homelesness? Give people homes. Poverty? Give people money. Dwindling secure employment? Give people a basic income. These may sound ridiculously simplistic but Bregman quotes study after study that shows the simplest solution is often the best.

For example; in the US, the state of Utah has all but eliminated chronic homelessness by the simple expedient of giving away free housing while saving $5000 per person in social service, police and court time. A similar pilot programme in the Netherlands reduced vagrancy by 65% and drug use by half while saving double the initial investment in social support services.

The idea of a Universal Basic Income (or ‘venture capital for the masses’) is something Bregman spends quite a bit of time on. It’s good for every percent of society he argues. “How will you get (production line robots) to pay you union fees?” asked Henry Ford’s grandson. “How will you get them to buy your cars?” responded union leader Walter Reuther. UBI has a surprisingly long history. William Pitt the Younger tried to get a version of UBI passed into law in the late 1700’s but his plan was scuppered by high-minded moralists fearing the depravity and wantonness of a population without starvation nipping at it’s heels. Even President Nixon tried to introduce a form of UBI not once but three times. Today the problem with free money, free housing and basic income is political and moral rather than financial Bregman insists. The right don’t think the poor deserve money and left don’t trust them to spend it wisely.

Politicians only discourse within popularly accepted boundaries but those boundaries can be stretched by extreme claims. Outrageous ideas can then slide along the ‘unthinkable-radical-acceptable-sensible-popular’ spectrum until they reach ‘policy’. Right now, that’s happening for extreme right wing ideas but it can work just as well the other way if we can make the message of progress and hope louder than the message of fear says Bregman.

The changes ‘Utopia for Realists’ suggests in our social and industrial landscape may look hopelessly unrealistic at the moment, but then, Bregman reminds us, once upon a time so did the abolition of slavery, women’s suffrage and gay marriage. ‘Utopia’, it turns out, is a moving target.