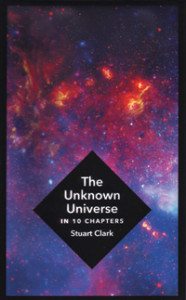 The Unknown Universe
by Stuart Clarke
Published by Head of Zeus www.headofzeus.com

Did you know that comets are formed by human wickedness ignited by the anger of god and the resulting poisonous rain is responsible for pestilence, sudden death and Frenchmen? No? Well the theory was a strong contender when its author, Georg Busch (surprisingly not the ex-president but, an astronomer from Erfurt in Germany), suggested it in the 16th Century. He might have made some mistakes but we’ve moved on since then to bigger, better and much more well-researched mistakes.

The publishers missed a chance to subtitle this book ‘in praise of the last decimal place’ since that’s pretty much the story of astronomy and cosmology that Stuart Clark, author, New Scientist consultant and all round astronomy-bod, tells in ‘The Unknown Universe’. He cites plenty of examples where astronomers produce a perfectly good theory that explains almost everything only to have the next generation dig into that ‘almost’ and upset the whole apple cart. Sometimes they put the apples into a much bigger cart, sometimes they replace it wholesale with an orange cart, sometimes its a catamaran of bananas and sometimes I overstretch the metaphor. But from redshift to relativity, from the CMB to dark matter, ‘almost’ is where the new discoveries lie.

In one way ‘The Unknown Universe’ is quite annoying in so much as it does exactly what it says on the tin. The structure of each chapter is pretty much the same. Clark gives a quick rundown of what we currently know via a potted history of how we figured it out then highlights where this doesn’t quite add up. Then nothing. It’s not like I should expect anything else. It says it right there on the dust jacket – “what we don’t know about time and space” – but I still felt as though somebody had torn the last pages from my book of who-done-it short stories. The frustration it engenders is, I suspect, a pale shadow of that felt by actual working astronomers as one thing ‘The Unknown Universe’ makes clear is how the whole ‘figuring-it-out’ thing is very much an ongoing struggle.

Mixed in with stories of how to see extrasolar dust rings with grape jelly, cardboard and spit and the unacknowledged contributions of unofficial female astronomers (the ‘librarians of space’) is quite a bit of cutting edge controversy. Greenhouse climate models may be ignoring the asymmetric affect of UV radiation on the Jet Stream. We may be able to dispense with Dark Energy if we abandon the almost axiomatic isotropic principal – the idea that the universe is the same in every direction- doing away with the need to postulate an expansion field (and the idea of a single age for the Universe). Dark Matter might join it as right now the European Space Agency’s LISA Pathfinder gravity wave probe is getting ready to test Modified Newtonian Dynamics (MOND). By the time you read this, Dark Matter might have gone the way of the aether and you can’t get more cutting edge than that.

I have a certain sympathy with the Busch’s of the world. The people left holding the wrong end of the theoretical stick, often the wrong stick altogether. With the scientific ground shifting so calamitously it can be hard figuring out where to stand. I admit, upon reading one or two of the outré theories Clark puts forth, my first through was ‘nonsense!’ My second thought was ‘why do I think that?’ I don’t have the depth of expertise to sensibly comment on the science behind them, certainly not after reading one brief chapter or paragraph. Is it possible I’ve internalised existing paradigms to the extent that even though my career or reputation don’t depend on them (and imagine if they did?) a knee-jerk conservatism automatically disparages interloping proposals? It’s easy to mistake repetition for truth and for your mind to close without you even noticing. I suggest jamming ‘The Unknown Universe’ in there to keep it open a crack.