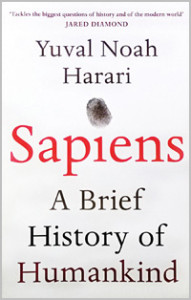 I left this brick of a book on my shelf for several months because I’d heard some bad things about it. The bad things are true. Despite calm and objective reporting on Muslim and Christian faiths (and a mild pitch for Buddhism) Harari badly looses academic objectivity discussing humanists and liberals. Lets put it this way; the three major religions get little maps depicting their historic spread as illustrations. Humanists get Nazi propaganda cartoons and Mein Kamps quotes. So, why is the book here? Because the aberration is just that – a curious one-off failure in a work otherwise rich in something easily overlooked in our daily tale of sound and fury: – p e r s p e c t i v e. So, if you are of a humanist/liberal slant, prepare to grit your teeth through pages 228 to 236 and dive right in.

Most of human history is a closed book to us. Or rather, is a no book to us. Modern humans, Homo Sapiens, showed up around 70,000 years ago in what Harari describes as the ‘cognative revolution’. We got the fire and culture stuff going right away but no-one thought of writing any of it down. We have little more than stones, bones and speculation for the intervening 60,000 years but Harari does his best to illuminate the story of our hunter gather ancestors until they fall into the trap of agriculture (‘wheat domesticated us’ he suggests). With that comes the invention of writing and things really get going.

With an ‘arrow of history’ fired off by a blindfold drunk, cultures rise and fall, religions flourish and wither. The code of Hammurabi and the Declaration of Independence unite people in ever greater empires of imagination – myths of justice and duty that work only because everybody believes in them. A further leap of the imagination – belief in the future – forged a marriage between commerce, science and empire in middle-ages Europe and allowed the petty kingdoms of a backwater peninsula to become rulers of the world. Harari likens the rise of capitalism to a new religion. One who’s adherents are happy to obey the only commandment – consume – and where empire builders have to pay closer attention to the size of their credit rating than the size of their army. It’s not hard to draw parallels between the Opium wars of the 19th Century and the Oil wars of the 21st– the loud retoric of freedom masking the quiet chime of the cash register.

Echoing Pinker’s “Better Angels of our Nature”, Harari is (grudgingly) willing to celebrate the accomplishments of civilisation but spares no blushes reminding us of the blood and suffering that forms its foundation. The last chapter indicates he expects Homo Sapiens has almost done strutting his fretful hour upon the stage and will erase or replace himself in short (historically speaking) order. I’d prefer to think of it as a ‘story so far…’ but if not, here’s hoping the next lot (‘Homo Postquam’ anybody?) makes a finer fist of it than us.