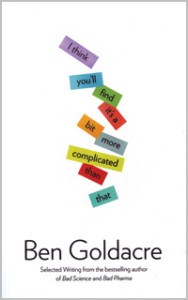 I Think You’ll Find It’s a Bit More Complicated Than That
by Ben Goldacre. Published by Fourth Estate www.4thestate.co.uk

Everybody lies said Dr House. Dr Ben Goldacre certainly wouldn’t agree with him. You won’t find a single lie in ‘I Think You’ll Find It’s a Bit More Complicated Than That’, a collection (mostly) of Goldacre’s Guardian columns. You will find misinformation, obfuscation, backpedaling, ass-covering, stonewalling, creative interpretation of results and really quite a lot of cherry picking of data. But no lies. Absolutely not. No siree bob. On an interesting, but I assure you, wholly unrelated note, you will find a short section on the litigious nature of alternative medicine practitioners.

“I Think You’ll Find…” is broken down into several themed sections – academia, government, journalism, quacks, irrationality etc. While some columns follow on from one another they can, for the most part, be read individually. This makes a big book approachable for those with internet-addled attention spans and – since it’s excellent for dipping, – a great bathroom read.

Through 100+ sorry tales of bamboozling fraudsters, egotistical politicians and careless journalists, Goldacre’s central theme remains the same – the lack (or abuse) of evidence-based reasoning in public life. He rails against everything from politicians ignoring drug programme evidence in favor of personal prejudices to (allegedly) dubious alternative health claims to bicycle helmet legislation. Using the example of public health where evidence-based treatments and practices only recently (we’re taking 1970’s not 1870’s) replaced ‘expert opinion’ to the great benefit of patients, Goldacre suggest that perhaps finding out what works best in any field would be a good idea before ploughing ahead with expensive and potentially damaging policies. In chapter after chapter, Goldacre does his best to de-mystify statistics and give us an understanding of what’s actually going on in scientific trails and surveys, how they can be read and mis-read – accidentally or maliciously. Apart from one paragraph on page 130 I’m still baffled by, he does a good job. In fact, the chapter on ‘Building Evidence into Education’ where the benefits and limitations of randomized trials are explained is so clear and incisive it should be mandatory reading for everybody who influences any public policy.

Goldacre has been accused of having something against journalists in particular and I must admit to having some divided loyalties here. Yes, the public good is important. Yes people make life choices based on what they read. Yes journalists and editors have a responsibility. But the truth is that, with some exceptional exceptions, the average jobbing journalist is not so much a campaigner for truth and justice as a stoker – forever throwing stories onto the endless stream of pages that need the same daily feeding regardless of what’s actually happened in the world. Their training is in how to find an angle and tell a story, not understanding statics. For example: put together one study finding no weight loss benefit to exercise and another showing exercisers eat more to compensate and ‘Ta Da!’ – you have your ‘man-bites-dog’ science story; ‘Exercise Makes You Fat’. Of course the first study was the only one out of 43 trials that showed the no benefit result and only 15% of the people in the second study ate more. That doesn’t make a good story though and stories are what sells newspapers (as well as magazines, websites and TV shows). Even supposedly reputable sources can’t always be trusted and it’s heartwarming to read about a class of school kids taking apart the ‘science’ in a Panorama episode.

Well that and always check the source.