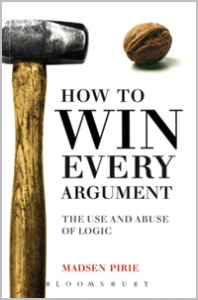 How to Win Every Argument
The use and abuse of logic
by Madsen Pirie. Published by Bloomsbury www.bloomsbury.com

“In the hands of the wrong person, this is more of a weapon than a book and it was written with that wrong person in mind”.

‘How to Win Every Argument’ is virtually the antithesis of ‘How Not to be Wrong’. It might as well be subtitled ‘how to be wrong and get away with it’ as Mr Pirie lists the many linguistic and logical flaws commonly to be found in arguments, outlines a brief history of their use and then show us, via examples, how best to take advantage of them.

Do you have to drum up support for a premise as thin as the heels of last year’s socks? Do you have a promise to weasel out of? A corner to escape? This is the book for you. Oh, some lily-livered readers may find offence in Mr Pirie’s bombastic and roundly opinionated prose but such offence simply shows that you sir, are not the caliber of man to wield this work to its greatest effect.

An ideal present for committee members, cult leaders and snake-oil salesmen of every stripe, it will be especially appreciated by those attempting to slither up the greasy pole of local politics.

Careful study will show you how to load your words so heavily you will need the help of two strong men to carry your argument and in no time you will be an unstoppable oration machine.

Unless, of course, your opponent has also read it.