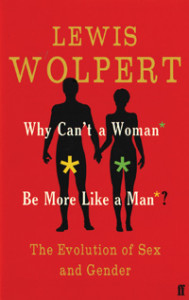 Why Can’t a Woman Be More Like a Man?
by Lewis Wolpert
Published by Faber & Faber www.faber.co.uk

“Just the facts, ma’am” was Joe Friday’s apocryphal catchphrase and that is just what Lewis Wolpert delivers with the provocatively titled ‘Why Can’t a Woman Be More Like a Man?’ “It would help male-female relationships if the fundamental biological differences between men and women were understood” says Wolpert who sets out to do just that by looking into the latest social and biological research into just what those differences are.

Usually pop science books are alive with little word portraits of the main players as well as scene setting personal anecdotes from the author. Wolpert dispenses with any such frippery here and gets right down to the nitty gritty with chapters on the brain, children, emotions, mathematics, map reading etc. The book reads very much like a collection of those ‘conclusions’ sections you skip to on long articles and Wolpert covers a lot of ground in only 180 pages. The information density is very high though – no sooner have you read one set of results than another rushes right along. I’d suggest taking notes.

So – what are the facts? Are any of the clichés true? Actually, sort of. No, women don’t talk more than men with both clocking in at an average of 16,000 words a day. Yes, women take longer to park – but they do it better. Yes, men think more about sex but they also think more about sleep and food. Yes, men’s brains are larger – but women’s brains are faster. Pre-natal testosterone has a lot to answer for here – powering the developing embryo to create distinct physical differences between men and women’s brains.

The research Wolpert quotes is current and very much a work in progress. Some research shows that men’s spatial navigation (i.e. map reading) is better, reflecting a similar, pan-species gender difference, while other research that shows that difference vanishing when spatial tests are given to matrilineal societies.

If you have children at that awkward age when they are asking questions about the differences between girls and boys, give them this book to read. It will tell them nothing they want to know but everything they should know before knowing what they want to know. Of course, you could just read it yourself and know now all the things you wish you knew then.

The writing here may be dry as a bone but the marrow is well worth the chew.