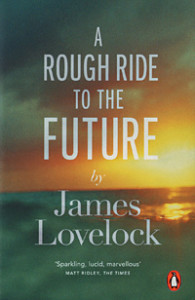 A Rough Ride to the Future
by James Lovelock. Published by Penguin www.greenpenguin.co.uk

“Who grieves the passing of the caterpillar?’ asks James Lovelock. If you’re the caterpillar, you might have something to say about it and – according to ‘A Rough Ride to the Future’ – we are that caterpillar.

In a book that’s equal parts memoir and manifesto, Lovelock makes it plain that despite our ‘accelerated evolution’, which began with the invention of the steam engine, humanity is no more than a transitional species, important only for what we can become; midwives to the metamorphosis of life on Earth from ‘wet carbon’ to something better suited to the hotter world ahead. Not the Global Warming ‘hotter world’ tramped out in our carbon footprints but the world of 100 million years in the future. A world baking under a slowly warming Sun, of scrawny extremophiles and evaporating oceans kick-starting a runaway greenhouse effect (water vapor being a far more potent greenhouse gas than CO2). It’s a long way in the future to you and me but to a planetary life form like GAIA it’s the equivalent of a couple of years. She needs a plan B.

We are, claims Lovelock, plan B.

In his 95 years, Lovelock has ridden through the scientific tumult of the 20th century as an independent researcher/inventor. Has, in fact, been the instigator of not a small part of it. He was the first person to measure CFC concentrations in the upper atmosphere – with a homemade sensor while hitching a lift in a high altitude test flight. His life-science detector flew to Mars on the Viking probes. He invented the Electron Capture Detector – a device capable of detecting industrial poisons with ten million times more sensitive than previously. Ironically, though the ECD has been used to detect poisons everywhere from the ocean to the arctic, its radioactive source makes it subject to current pollution bans.

However, it is his theory of ‘GAIA’ – Earth as a living positive feedback mechanism maintaining the biosphere for which he is most in/famous. Grudgingly accepted in diluted forms by many planetary scientists over the years, the idea has become virtually an axiom of the Green movement.

However, Lovelock himself is anything but ‘green’ in his views. He advocates nuclear power over ‘ill-conceived’ renewables and bemoans the decommissioning of UK nuclear stations (tripling power costs for consumers and industry he claims) and the knee-jerk PR stunt of shutting German and Italian nuclear stations after the Fukushima incident. He echoes Paracelsus’ ‘the poison is the dose’ more than once as, for example, when panicked Los Angeles residents swallowed anti-radiation iodine tablets more radioactive than anything that reached them from Fukushima. He argues that the blanket ban of DDT (in which, to Lovelock’s chagrin, his own ECD device was instrumental) instead of a phased reduction as happened with CFC’s has resulted in 2 million deaths a year from malaria. The responsibility for this Lovelock lays unequivocally at the feet of Rachel Carson’s seminal ‘Silent Spring’ and the early Green Movement.

Our intelligence, says Lovelock, is still at an “infant stage” and we should “abandon the absurdly hubristic idea of saving the planet”. He argues that retreating into high-density, environmentally defensible, chrysalistic cities to transform into a mature, silicon life form while GAIA gets on with looking after the planet is our best bet for survival.

There’s a lot here I don’t agree with. There’s a lot here I’d bet good money you won’t agree with. But Lovelock is as independent a scientist as it’s possible to be, never in anyone’s ‘camp’ but his own and has regularly given the scientific establishment – in his own civilised way – a much needed kick up the peer review. “A Rough Guide to the Future” is intriguing, it’s infuriating, it’s recommended.