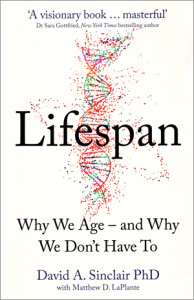 Ray Kurzweil famously said that he wants to ‘live long enough to live forever’. In ‘Lifespan’, the goals of genetics and ageing researcher David Sinclair are rather more modest. He doesn’t promise us forever, he promises us Harriette Thompson.

Harriette Thompson looked 70 when she broke records at the 2014 San Diego marathon. She was 91. Harriette was a rare exception but she won’t stay that way for much longer Sinclaire says. His position gives him an inside track on the treatments and drugs coming down the pipeline that will extend life and healthspan. The future he sees for us is one where 90 year old marathon runners raise no more comment than 50 year old ones do today. A future where 90 year old teachers instruct 70 year old students and great, great grandparents rough-and-tumble-it with their great, great grandchildren. Its a future, he says, that is sitting on lab benches today.

‘Lifespan’ is full of acronmys; NR and NMN, SIR2 and NAD boosters, AMPK activators, TOR inhibitors and Metformin (a diabetic drug). All molocules, genes and drugs that work to restore vitality to the old and extend health and lifespan. Despite their tsunami of promise and Sinclair’s boundless enthuasism, the caveat is that most of the hard data is from experiments on yeast, fruitflys and mice. Trials with people are ongoing but results and treatments are years away so Sincalir isn’t waiting. He’s confident enough in the research as it stands to take a bunch of the stuff that works so well in animal studies. So does his dad, his brother, his co-workers and their families. Evidence is anacedotal of course but very positive.

On one level, ‘Lifespan’ is basically a funding pitch but Sinclair is up front about it. Ageing isn’t seen as a disease so research grants are hard to come by while doctors won’t prescribe, nor insurance companies cover, treatments. It’s hard to fault his logic. We spend billions on what he describes as ’whack-a-mole’ treatments and research for cancer, heart disease and Alzheimers while ignoring their overwhelming contributing factor; ageing, Being a smoker, he reminds us, increases your cancer risk fivefold but just being over 50 increases it a hundredfold.

Sinclair is aware that all these extra years come with consequences, challenges and risks – who needs an immortal Cyril Smith or Idi Amin? He also expects extending vitality will “fundamentally alter the way our economy works”. Overall though (and unsuprisingly) he’s confident that the personal, social and financial gains will outweigh any downsides.

I have to mention LePlante (the writing half of the duo). He may be over-fond of short, melodramatic sentenses but he makes a decent fist of translating complex research for the layman’s ear – not shying away from the science but not overloading us with it either.

Sinclair’s message is certainly an alluring one, especially for those of us with the cool winds of mortality whistling around our ankles but – for that very reason – it behoves us to make sure our critical faculties are fully engaged while listening to it. Sinclair is involved to varying degrees with commercial companies selling us the stuff he’s talking about. This, by no means, makes him a snake oil salesman but readers should allow for the possibility that it might motivate him – consciously or unconsciously – to ocasionally be more bullish than perhaps prudence might dictate. For instance, he doesn’t discuss the side affects of the Metformin drug I mention above and of which he has such high hopes. In practice it is often discontinued by diabetic patients due to the side affects of explosive flatulence and galloping diarrhoea. An extra ten years of vitality sounds great but less so if you have to spend nine of them in the bathroom.