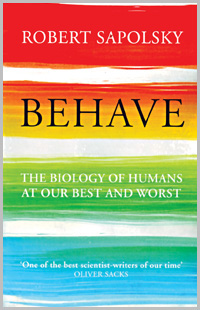 The next time you’re up for parole make sure your case is heard immediately after breakfast or lunch. In a survey of 1,100 judgements 60% of paroles were granted just after eating (and 0% immediately before lunch).

That advice comes from Neurobiology. It’s a pretty new field that’s been quietly undergoing a ‘Moore’s Law’-style growth of it’s own since the start of the Century. Little is clear cut and nothing is simple but what Neurobiologist Robert Sapolsky gives us in ‘Behave’ is a snapshot of that fast-moving field, what it says about why people behave as they do, how we can guard against the worst and encourage the best of those behaviours in ourselves and others.

When it comes to making decisions we are, frankly, a mess. Study after study shows how inordinately fickle and pathetically malleable our decision-making is, how quixotic our imagined sense of ourselves as rational actors, how mutable our definitions of them and us. Context – biological, evolutionary and cultural – is everything.

“You have to think complexly about complex things” says Sapolsky. ‘Behave’ is two and a half pounds of complex thinking dense with insight and relevance and expressed in language that is clear, witty and humane. Were I to highlighting interesting passages I could leave this book fluorescing yellowly by my bed as a nightlight. Here’s some random tidbits…

Any peruser of Sunday Supplement science knows all about the brain. About the amygdale – the ‘fear centre’ that doesn’t work in psychopaths. About testosterone or the MAO-A ‘warrior gene’ making you aggressive or oxytocin making you all lovely dovey. Except none of that is true. The amygdala has multiple, subtle and far reaching effects, testosterone and MAO-A can make you *less* aggressive and oxytocin can make you a jerk.

Bankers cheat more on economic tests. Big surprise I know but don’t go riding off on your high horse just yet. When primed to think about how much better off they are than poorer people, so does everybody else.

The preponderance of the 7R ‘dissatisfaction gene’ may have pushed our ancestors to spread around the world 20,000 years ago.

Fun stuff but Sapolsky doesn’t shy away from the worst of us – the massacre of the village of My Lai, GI’s sending home Japanese skulls as souvenirs, a million Tutsis hacked to death in the Rwanda genocide and cultures where Fido is a menu item. Closer to home, the smiling faces of ‘honour killing’ victims stare back at us from page 290 so we can feel the visceral horror of children killed by their own parents.

These are all difficult passages to read and it’s easy to see how hatred can bloom – even mild mannered academics can fantasise (in gruesome detail) about torturing Hitler. There’s no shortage of Thems for an Us to hate but it doesn’t have to be that way says Sapolsky. The ‘banality of good’ and ‘cold blooded altruism’ are some of the unique concepts he explores to show (with examples from South Africa and Northern Ireland) how we can use our knowledge of Neurobiology on the personal and international level to build lasting peace.

Perhaps all this is for the mercurial masses and not sensible, ‘constant-as-the-North-Star’ folk such as yourself but consider those parole judges. Making decisions is their job. They train for years, are chosen specifically for their capability for careful deliberation and yet whether they’ve just had a sandwich is a better predictor of their decisions than experience, politics or morals.

In the last chapter Sapolsky draws some conclusions you may not agree with. I can get behind the abolition of the criminal justice system, not so much his ‘free-will-of-the-gaps’ stance. Predominantly though, ‘Behave’ is a brilliant spotlight illuminating blood-soaked cognitive bear-traps we’ve been falling into for millennia and behavioural limitations we have literally evolved to ignore. Particularly in these benighted times it is an extraordinarily relevant and significant work.