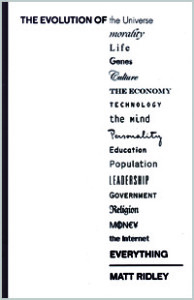 The Evolution of Everything
By Matt Ridley
Published by Fourth Estate www.4thestate.co.uk

The theory of evolution has been one of the most powerful scientific ideas for over 100 years but Darwin was piped at the post by an earlier publication. You probably think I mean Alfred Russel Wallace. I don’t. The first suggestion of ‘survival of the fittest’ came from Sicilian philosopher Empedocles more than 2000 years ago. Empedocles got the basics right but without any supporting scientific framework his was an idea whose time certainly had not come. “You can’t stop discovery happening,” says Matt Ridley, but “you can’t hurry it much either”. That the theory of evolution had itself to evolve is an interesting premise but Ridley takes it much further than that in ‘The Evolution of Everything’ and applies what he calls the ‘general’ theory of evolution to almost the whole of human experience (there’s a list on the book cover). Humans, he suggests, prefer a nice, simple cause and effect story so we attribute historical change to the gods or great men – leaders, inventors, and generals. This, insists Ridley, is a completely topsy-turvy view of the world.

There are echoes of James’ Burke’s ‘Connections’ and even Asimov’s fictional ‘psychohistory’ in ‘The Evolution of Everything’ as Ridley sets out to show that much of human culture is a chaotic, emergent ‘bottom-up’ phenomenon rather than a planned and imposed top-down achievement. “The flywheel of history is incremental change through trial and error with innovations driven by recombination” says Ridley. The great men are not driving the waves of change, just riding the highest. Overall, Ridley argues well for the idea though more so in some fields than others. Language, religion and culture are a good fit and it’s certainly plausible we’d have relativity without Einstein and light bulbs without Edison but I’m not sure the world would look much the same without at least some innovating individuals. I’m also not convinced that private health care would take the form he describes even without the Bond-villianish machinations that created socialised medicine (the paragraph on the Friendly Societies V the Combine reads like a pitch for a low budget British period drama. I’d pay to see the movie).

However, Ridley’s ‘general theory of evolution’ isn’t just descriptive but proscriptive too. He argues that not only are all the phenomena he examines emergent properties rather than imposed plans but that where plans are imposed they invariably distort the evolutionary order with stultifying if not downright disastrous results. If this sounds a little like right-wing, liberal, lassie-fair, economics well… labels, are slippery things. “People of the same trade seldom meet together…but the conversation ends in conspiracy against the public” is Adam Smith not Karl Marx.

Ridley has some solid examples to back up his ‘emergent order’ ideas – perhaps most intriguingly in the area of finance. For example; forty percent of Kenya’s GDP flows through the form of M-Pesa – a private currency based on phone credit – and his observation that inflation in the hundred years before the founding of the US Federal reserve was 8% but 2300% in the century after is suggestive. Governments don’t like private currency (Bitcoin’s creator isn’t shy, he’s scared) but they could be fighting a loosing battle. Bitcoin itself may be too limited to replace national currencies but the block-chain software it relies on could allow all sorts of groups to create their own mediums of exchange.‘The Evolution of Everything’ may not be wholly original (I’m sure Ridley would be the first to admit an evolutionary progression) or wholly convincing in every case but the central idea here; that authority or chaos are not our only alternatives and that order self-generates – often in spite of expert’s best predictions – out of most human enterprise is a powerful one. As powerful as Darwin’s big idea? Hmmm …ask me again in 100 years. Or 2000.