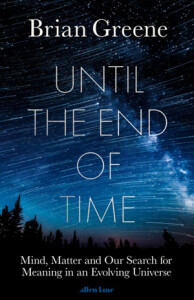 Until the End of Time
by Brian Greene
Published by Allen Lane www.greenpenguin.co.uk

Ancient Babylonians had the Enuma Elish, Hinduism the Rig Veda, Christians Genesis. We have “Until the End of Time” – a creation myth (with significantly less ‘myth’) for the scientific age.

Its an ambitious task Greene has undertaken, to set down in a single volume and to the best of our current knowledge, everything about how the universe came into being, how it produces time, atoms, stars, planets, DNA, life, mind and how it might all end in the unimaginably distant future (or not, that’s all a bit ‘choose-your-own-adventure’ at our current stage of ignorance). In some parts you will definitely think, “yes, yes, I get it, move on”, unfortunately, no more so than in the opening chapter on entropy. Don’t let it put you off though. The subject is more elaborate than you might think and important to understand for the rest of the book but honestly you can probably skim once you’ve got the gist of it. I can’t say I’m on-board with his ‘people-as-happy-automatons’ conclusions in the chapter on consciousness either but can’t, right at this moment, think of a counter argument. Give me a minute on that.

Mostly however, ‘Until the End of Time’ has clear explanations, intriguing insights and illuminating analogies to refresh or expand your understanding. A particularly striking metaphor is having the floors of the Empire State building represent multiples of 10 years that brings a very concrete image to the mind-boggling spans of time we have to consider when talking about the possible end of the Universe.

For all the knowledge Grene lays on current readers, I think he might have half an eye on a different audience. When future historians reach for a volume to understand 21st Century creation myths, I can’t imagine they’ll find a better choice than this.