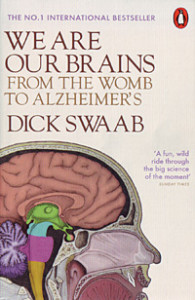 We Are Our Brains
From the womb to Alzheimer’s
by Dick Swaab. Published by Penguin www.greenpenguin.co.uk

Basically, it’s all your mother’s fault. Before you punch the air and shout ‘I KNEW it!’, let me qualify the statement by saying that, according to ‘We Are Our Brains’ most of the things wrong with you happened on your mother’s prenatal watch even though she didn’t have control over a lot of the influencing factors. So, at least, says Dick Swaab, neuroscience researcher and Director of the Netherlands Institute for Brain Research. Most of our character, sexuality and propensity for mental illness, he claims, was laid out for us before we even had eyes to open. Suffer from ADHD, autism, schizophrenia or body identity disorder? Are you gay or straight? Short-tempered, smart, sanguine, slow, fat, cheerful, depressed or skinny? All of these elements of your character and biology were established before birth by accident of neurological development, the interaction of nutrition, growth factors and environmental poisons – sorry ladies, there’s NO safe level of alcohol or nicotine exposure for your little bundle of joy.

The book looks dense and relatively intimidating at first glance but the chapters are short and generally to-the-point though there is some repetition – a reflection of newspaper column origins. They are very (very) roughly arranged chronically from birth (see above) to death. In between Swaab gives us an ‘Idiot’s Guide’ to the functioning of the brain through childhood, puberty, sex, religion, morality, free will, memory and the many daily miracles it performs on our behalf. It guides us through a world we are barely aware of, filling in blank spots in our daily narrative with memory and imagination. Our free will is a thin veneer over the workings of motivations and chemistry we’re just beginning to understand and even our sense of physical identity can be manipulated like a cheap stage show (amputees relieving phantom pain by literally mirroring a lost limb) Of course, the many ways our brains can fail us also makes for fascinating, if disquieting, reading and by the end of the book I felt a certain sense of a bullet dodged that I’ve made it this far without some neurological monster raising it’s head!

Swabb’s own work on gender identity and sexuality helped overturn the ‘nurture is everything’ paradigm prevalent at the start of his career. Brain research is hardly a hot-button topic but it caused uproar at the time. Militant gays protested outside his house and he had bodyguards at his university – he prints some of the death threats he received in the book. Militant feminists simply threatened legal action and staged passive-aggressive knit-ins at his lectures!

Interestingly, he supports some non-traditional medical practices too. Acupuncture works (in some circumstances), St John’s Wort is as useful as prescription anti-depressants and ‘herbal remedies’ do have beneficial effects. Don’t go wild on the alternative medicine just yet though – anything that has an effect has side-effects and non-regulated ‘remedies’ can cause delirium, depression, liver inflammation, coma, mercury poisoning and more.

Swaab is a man of strong opinions, not all of which I find myself in agreement with. I wouldn’t expect him to be a fan of boxing but I feel he may be over cautious recommending nothing more physically taxing than chess as neurologically safe sport and his suggestion that heat-fueled aggression is the motive for the historical prevalence of Summer invasions is just ridiculous. Also – watch out for the illustrations. A couple of them are disturbing enough to put you right off your sandwiches.

“We Are Our Brains” isn’t the last word on brain science. Swaab is quite clear that, despite the amazing progress in understanding just how three pounds of jelly make us…em…us, there is a very long way to go. Still, ‘nosce temet’ has always been good advice and this is an excellent place to start. Your know your mother would agree.