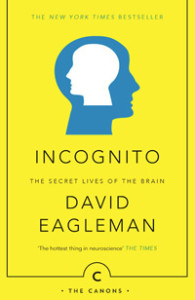 Incognito
by David Eagleman
Published by The Canons www.canongate.tv

Ah, there you are. At least, there you think you are. If you look closely, says Neuroscientist David Eagleman, it turns out that the bit of you that thinks it is you mostly isn’t there at all.

‘Incognito’ is not a brand new book but a reprint of Eagleman’s 2011 opus on the brain. Much like Daniel Kahneman’s ‘Thinking Fast and Slow’ in the same year, it helped define a new paradigm in our understanding of the human mind for the early 21st Century. Other authors have built upon his work – I’ve reviewed some of them here – but ‘Incognito’ remains a highly readable introduction to the new science of (lack of) self.

Eagleman wants to convince us that, while we’d like to think of our consciousness as the CEO running the company of us, it’s more like some back-room maintenance guy. Largely ignored when things are running smoothly, it gets trotted out only when something doesn’t work as expected and shooed back to its closet when everything is ticking over. For most practical purposes the mental heavy lifting is being done for us by anonymous suites of non-conscious mental processes whose tireless efforts we happily credit as our own.

“Much of who we are remains outside of our opinion or choice”, says Eagleman and he doesn’t lack for examples to support his case. Christmas Clubs prevent savers blowing their money during the year. Drinkers know to keep alcohol out of the house to avoid temptation. Dieters negotiate a ‘20 minutes on the treadmill for one KitKat’ deal with themselves. If we are the singular beings we claim (I think, therefore I am), asks Eagleman, just who is negotiating with whom here?

Like a dogged detective chasing down a suspect, Eagleman searches Free Will’s usual haunts. Each time though, finding only the smouldering cigarette, the still warm coffee cup, the swivel chair creaking as though consciousness has just now got up and left the room. For such a manifest characteristic it proves amazingly elusive. James Clerk Maxwell claimed his famous equations ‘just came to him’, Coleridge could only write ‘Kubla Khan’ under the influence of opium. Kenneth Parks drove 14 miles to murder his in-laws – while asleep. Who takes the credit? Who gets the blame? “It is not clear how much the conscious ‘you’ gets to do any deciding at all”, Eagleman concludes.

There are those who fear this new paradigm of “my brain made me do it” will absolve criminals of blame with courts letting them run riot in the streets. No so claims Eagleman. Our biology is our behaviour and ‘blame’ is the wrong question. The real issue facing lawmakers is whether harmful behaviour is ‘modifiable’. “Our prisons”, he claims, “have become our primary mental health care institutions”. Inflicting punishments on the mentally ill has little influence on future behaviour he reminds us and suggests that a more neurologically aware approach to criminal behaviour would be safer and more humane all round.

It should be noted that not all neuroscientist agree with Eagleman’s views on the minimal role of consciousness. Paul Bloom, author of ‘Against Empathy’, feels there is a larger role for free will. Unfortunately, our intuition may not be a good guide here. What evidence there is – from catching baseballs to pressing buttons in the lab – indicates that free will is more post-hoc rationalisation than primary motivator.

It may be that some future research will discover a more prominent role for self awareness but in the meantime we may have to get used to having only a walk on part in the story of our own lives.