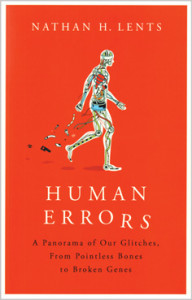 Ah, man, that paragon of animals. In form and moving how express and admirable, whose eyes are in backward and whose sinuses are upside down. Nature loves a good joke but all too often we are the punch line. Our eyes are miracles of evolution certainly but by a quirk of early development the light sensing cells face the back of the socket (octopus eyes, with their independent evolution, are the right way round). Our smushed up faces have forced the drainage channel of our main sinus cavities to the top, leaving us with a legacy of blockages and infections our dogs never have to worry about.

So far we’re only on page 11 of ‘Human Errors’, where author Nathan H. Lents reminds us that “we are the long-term products of short-term actions.” In a further half dozen chapters covering anatomy, diet, genetics, reproduction, disease (warning: not suitable for hypochondriacs) and the brain, Lents outlines, in a genial if occasionally gallows-humourish style, some of the many errors and snafus that a myopic evolution has saddled us with.

Take that alphabet of vitamins we need to stay healthy. Becoming omnivorous a few million years ago was a useful survival trick but it took the evolutionary pressure off elsewhere. The GULO gene, for example, allows animals to make their own vitamin C. A few million years ago, a random mutation banjaxed the gene in our primate ancestor. In a forest full of vitamin C-rich fruit nobody noticed but start waking upright and heading out into the big, wide, fruit-free world and suddenly everybody gets Scurvy. Our ability to eat anything has turned into a requirement to eat everything.

Despite our dietary drawbacks we’ve spread ourselves around quite a bit so you’d think that reproducing would be something we’re good at. It turns out the wonder is not how well we reproduce but that we reproduce at all. Besides the obvious problem of our giant heads that made birth one of the leading causes of death for our ancestors, we suffer from a litany of sub-optimal reproductive design choices. That’s the way genetics works – a quick-fix solution for today with no thought for tomorrow.

Our genes, in general, are a bit of a bad news/good news situation. Good news: our cells reproduce with a 99.999% etc accuracy. Bad news: there’s around 100 quintillion chances a day to muck things up. Good news: most of those mistakes won’t hurt you. Bad news: that’s because most of your DNA isn’t actually you but a billion years of accumulated junk. Good news… well, actually, it gets hard to tell the good news from the bad here. All that DNA – dead viruses, duplicated duds and genes that just like to get up and go for a wander – might be bad for you individually but make the species mutable and adaptable.

The most successful of those adaptations is our big brain but Lent’s chapter title ‘A Species of Suckers’ is a clue that even here there are problems. One chapter doesn’t really do justice to the many ways our cerebral shortcuts bamboozle our rational selves but Lents manages to hit a lot of the high – or rather, low – points of our biases, delusions, illusions and irrationality. On the plus side, we’ve discovered monkeys are as bad at economics as we are (though that might be a bit of a low bar).

In the last section, musing on the future of humanity, Lents’ perky prose takes a slightly darker tone. Evolution hasn’t finished messing us about yet. We are on the cusp of being able to re-write our biology while at the same time being on a ‘collision course with our own industrialisation’. We have the tools to save ourselves but do we have the will? If not, Lents wonders, will that prove to be the ultimate human error?