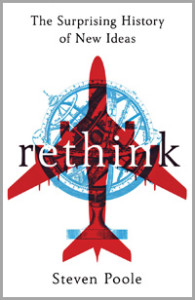 Corpenicus was wrong. At least according to Steven Poole in ‘Rethink: the surprising history of new ideas’ that is the conclusion any reasonable scientist would have come to in the 16th Century. The heliocentric model of the solar system explained observations no better than Tycho Brahe’s geoheliocentric theory where the planets revolved around a sun that in turn revolved around Earth. It also failed to meet predictions other astronomers made of its consequent Coriolis effect. There’s never been any scientific theory that was free of troubling anomalies Poole reminds us and science is not a smooth progression where old ideas are overthrown by new and better ones. Rather it’s a tangled web of influence and inspiration where clever ideas are heartbreakingly lost, dismissed or forgotten only to be re-discovered and re-imagined lifetimes later. “Shiny new ideas can have surprisingly deep roots”, says Poole and often, in the race for the new and innovative, we forget how much invention is re-invention.

One of the problems those 16th century astronomers had was a lack of sufficiently accurate tools to detect the Coriolis effect they correctly predicted as a consequence of Copernicus’s theory. The same problem dogged Democritus of Athens. He had to wait two and a half thousand years for his theory of atoms to be accepted (as late as 1908 by some holdout physicists) and his Kosmoi idea of multiple universes has only in recent decades come back into fashion. Sometimes a clever idea is just too radical, too threatening or just from the wrong sort of person says Poole. Sometimes though, the problem is that good ideas often start out as ‘black boxes’ where you can say what is happening but not the how or why. Gregor Mendel’s black box was the gene, for Lamarck, epigenetics and for Ignaz Semmelweis it was germ theory (still frighteningly ignored in some modern hospitals).

Poole singles out some chief names from the legion of the wrong such as Malthus, Lamarck and Sheldrake and attempts to stitch together their tattered reputations. It is worthwhile, he suggests, to check what each actually said rather then what decades of detractors claim they said. Sheldrake’s suggested theory-disproving experiment has never been performed and it’s arguably only a mis-translation that made Charles Darwin and not Jean Lamarck the Father of Evolution.

‘Rethink’ is a book of ideas about ideas and it’s just stuffed full of wonderfully enticing, brain bending concepts – old ideas that are resurfacing across a wide range of subjects. Philosophy gets a name check with the PocketStoic app and Pythagoras’s ‘Panpsychism’ that holds consciousness as a cumulative rather than emergent property of matter. Politics gets a suggested revival of democracy that will probably get Poole on a government watch list and a renaissance of the Heath government’s universal basic income. When it comes to food, Poole reminds us that Francis Bacon’s frozen food experiment spent four hundred years in history’s deep freeze before Clarence Birdseye thawed it into a food empire. Victorian suggestions that ‘land shrimp’ might be a practical protein source are logical but I can’t say I find the idea of a bag of cricket flour Chirps appetising. And while we’re on the unpalatable: what’s so bad about eugenics?

I can just see some of you puffing up in outrage at that last one. Sure it’s an idea appropriated by monsters into a circus of horror says Poole, but before you break out the pitchforks and torches, consider; you don’t have to go back more than a couple of generations to find ancestors who would be casually racist, misogynistic, anti-semitic homophobes by modern standards. Which of your firmly held mores asks Poole, will send a shiver down the spine of your great-grand kids? Should banning the choice of harm outlaw the chance of help?

The clearest results, our firmest conclusions, must always be considered provisional approximations. Just something good enough to work with until something better comes along even if that something is salvage from history’s scrapyard. ‘Rethink’ is an excellent way to shake up your dogmas with the shock of the old.