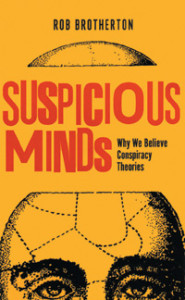 Twenty years ago I had a colleague who liked to tease the CIA. All his emails had a footer containing a selection of security-sensitive trigger words. The intention was to cause any email reading computers in the Pentagon’s basement to flag the mail and force some poor intern to slog through his otherwise mundane chat. After a year of this, a nice young lady moved into the flat under his and struck up conversations which came round to politics suspiciously often. Or so he said. Maybe he was paranoid. You’ll notice that I’m not repeating any of those trigger words. In these less innocent times, my visitor might not be a nice young lady. Perhaps I’m being paranoid too. If so, we are in, not just good company, but a lot of company. Presidents from Washington to Obama have spoken of the ‘hidden hand’ behind politics and something like 30% of people buy into vaccine conspiracies, faked moon landings, Lady Di assassinations or government alien cover-ups. Well over half the US population believe Lee Harvey Oswald didn’t act alone. It would seem, says psychologist Rob Brotherton in ‘Suspicious Minds’, that conspiracies are not just the province of the tinfoil hat brigade and that we are all conspiracy theorists at least some of the time.

One of the problems Brotherton tries to tease out is what exact a conspiracy theory is. After all, individuals, businesses and governments certainly do conspire and prudent paranoia is the brain’s early warning system. Sometimes people really are out to get you, cartels and terrorist plots are real things and governments are certainly no strangers to intrigue. ‘Operation Northwood’ proposed by the US joint chiefs of staff planned to blow up US and refugee ships and blame it on the newly Communist Cuba in the 1960’s. That plan was scuppered by Kennedy but you can’t keep a good idea down and who knows what subsequent administrations thought of it…

… which brings us to just how easy it is to start a good conspiracy theory. You can play the ‘Paranoid Style’ game at home with a few friends. Everybody pick one historical figure and try to find evidence they were part of worldwide plot by vampires (or aliens) to control the world. It’s surprisingly easy. History, says the game’s inventor Rob McDougall, “is full of information that can be made to seem significant”.

A hundred million years of evolution has made us very good at finding significance. Our brains are primed for paranoia. We see intent everywhere – in the rustle of the long grass and the glance of a rival – but sometimes we’re just too good at it. We filter the noise until we get a signal, even if there is no signal there to start with.

For example, ‘Proportionality Bias’ means we expect a big effect to have a big cause. A lone nutter’s bullet can’t possibly sway world events so we look for a deeper meaning. ‘Confirmation Bias’ allows us to examine all the evidence but see only what we want to see while the ‘Information Illusion’ – where we don’t know how much we don’t know – allows us to mistake our shallow knowledge for deep understanding. Brotherton gives us a couple of crafty tests including a number sequence trap I fell right into and a complete-the-drawing illustration that highlights the difference between knowing ‘how to work a bicycle’ and ‘how a bicycle works’. According to Brotherton, half of people get this last one wrong (or 1/3 of the Mensans I tried it on).

Brotherton’s clever prose and engaging story of popular paranoia provides plenty of suggestions for the appeal of conspiracy theories. It would be possible to come away with that idea that conspiracy is just real life with the contrast turned up. But of course, that might be just what they want you to think.