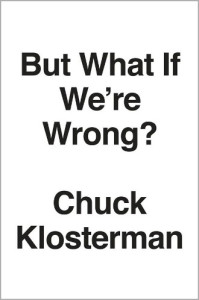 But What If We’re Wrong?
by Chuck Klosterman
Published by Amberley www.amberley-books.com

Almost everyone has been wrong about almost everything almost all of the time throughout history so what will future ages say we’re wrong about today? The problem of course, is that while we may all admit to the possibility of being wrong in general, nobody wants to admit to being wrong about anything in particular. In ‘But What if We’re Wrong?’ Chuck Klosterman wants us to think of today as seen from the future. Can we tell which ignored artist or derided culture will recontextualise our society for 22nd or 32nd Century eyes? Well no, not in any detail anyway but if we examine what and how we remember things from the past, perhaps we can get a feel for the sort of things that tend to ‘stick’ historically speaking.

It’s unlikely there will be another explanation for why the sky is blue and probability theory is looking pretty solid but there’s still plenty of room for error on the science front. Physicist Brian Greene admits that future scientists may consider our theories of gravity as laughable as Aristotle’s who thought stones fell to the ground because they just really wanted to be there. Neil deGrasse Tyson is more bullish, claiming that there haven’t been any significant paradigm shifts since the Copernican revolution moved us from the centre of the Universe (though I’m pretty sure Germ Theory was equally as upsetting to the medical status quo. Ask Ignaz Semmelweis).

Klosterman has spent much of his career writing about the music scene, and while there are a couple of gaffs in his grasp of science, he fares better with the arts. What matters now, he points out, isn’t necessarily what matters in the long run. Sales are irrelevant when the people who did the buying are dead. Take a time machine back to the golden age of Rock & Roll and you’ll be far more likely to hear Nelson Riddle, Les Baxter and Tab Hunter than Jerry Lee Lewis, Chuck Berry or Fats Domino. ‘Moby Dick’ was a massive flop that ruined Melville’s career but today it’s the archetypical ‘classic’ novel. “The future literary cannon will be populated with the types of people who are currently excluded from it,” Klosterman says. Perhaps, he suggests, they will arise from some social group you can currently ridicule in public without fear of censure (my money is on authors of online fan fiction).

No matter how cherished our institutions, how emphatic our values, they are, ultimately, transitory says Klosterman. Much of what now seems obvious to us in retrospect was preposterous in prospect. Future historians might consider Regan’s presidency a time of mass delusion. Obama’s skin colour may rate as small a footnote as JFK’s religion. Perhaps even (American) football will all but vanish in the next 25 years. If you think the latter unlikely I’d remind you how fast smoking and smokers went from popular to pariah.

Ultimately, what will be elevated and what neglected from our little fretful hour will depend on the tastes of whoever’s doing the remembering. Tastes that almost certainly won’t match ours. It will be people we would most likely consider weirdos, says Klosterman, who get to decide what matters about the past because it’s weirdos who care the most.

Addendum
There wasn’t quite room for this in the printed version but I have to give a quick nod to the designer, Nicole Laroche, for the understatedly clever and subtle cover. As you can see from the image, the cover is plain text on a white background with nothing to indicate that it is actually printed upside down (i.e. spine on the right). When displayed on a bookshelf as intended – with the cover text the right way up – the very act of picking up the book and discovering you are, in fact, holding it wrong, is an instant and palpable evocation of the author’s theme.