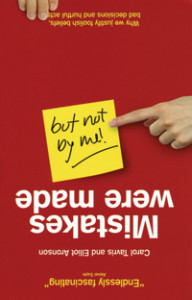 Mistakes Were Made (But Not By Me)
by Carol Tavris & Elliot Aronson
Published by Pinter & Martin Ltd. www.pinterandmartin.com

You’re wrong and you won’t admit it.

A bit of a sweeping statement that but given that thousands of people (I hope!) are reading this article, a significent percentage of you must have engaged in a disagreement – with your spouse, stranger on the internet, neighbouring country – whatever. You can’t be right all the time so when was the last time you were wrong about something significent? Having a bit of diffulty coming up with an example? Either you are never wrong or there’s some secret, sinister censor erasing your memories of error. There is. It’s you.

‘Man is not a rational animal, he’s a rationalising one’ said Robbie Heinlein back in the middle of the last century. A pithy aphorism that fifty-some years later award winning psychologists Carol Tavris and Elliot Aronson attempt to put some numbes on. “Mistakes Were Made (But Not By Me)” is not a new book – it’s been banging around the US for a couple of years – but this edition is the first printing on this side of the pond and in it the authors explore why we can easily change our mind about small subjects but the big stuff is different. What is that inner censor that will defend to the death anything we are invested in and why will we twist our minds into pretzel shapes and throw anything – logic, self-interest, friends, loved ones – onto the pyre to keep the flame of self-justification flickering?

Politics and law are wide, ripe fields that Tavris & Aronson harvest heavily but they are not the only examples. National obsessions (in the US at least) with satanic Kindergartens and ‘recovered memory’ fads rip families apart with manufactured accusations of child abuse. All mistakes made by decent, honest people trying to do right but who instead find themselves on a slippery slope of wrong they can’t afford to acknowledged or abandon. We all think we’re better than that. We’ed never fall that far. We aren’t. We would. A salesman’s sample, a ‘free’ gift, a stroked ego sabotages your sense of obligation and softens you up for the panhandle. The mental tricks we use to justify stealing office supplies are the same ones that justify a missile strike on civilian targets. Good men can be made into monsters if the installments are small enough.

I can’t imagine anyone who’s life would not be improved by embracing the author’s insights here but there is a nagging feeling that Tavris & Aronson are like a dog with a bone. It’s a big, juicy, important bone that we could all do with chewing on but it’s still just one bone. Sure, someone might be unreliably enthuastic in defending an expensive decision but ‘buyer’s remorse’ exists for everything from cars to counselling too. Kennedy’s ‘buck stops here’ approach may have helped his career in the ‘60’s but it sunk Carter’s in the ‘70’s. And while we’re on the subject of errors – praising students for effort rather than just the solution is fine. Telling them that studying will increase their IQ is just plain wrong.

The authors promise to show us some methods to overcome our inner censor but they don’t really come up with the goods. So what if the cost of admitting error is sometimes less than we fear? Sometimes it’s more. Might it not be better to subvert that inner censor? What if, instead of defending a self-image of adamant confidence, it was defending a self-image of adamant honesty? Maybe the more we believe ourselves to be the sort of person that admits mistakes and takes it on the chin the more our inner censor will work to make it true.

Of course, that’s just my opinion. I could be wrong.