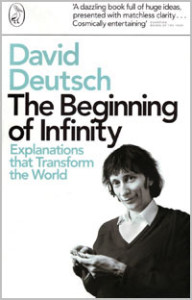 The Beginning of Infinity
Explanations that Transform the World
by David Deutsch. Published by Pelican Books www.penguin.com

Imagine giant War Llamas galloping across the Home Counties – if only some ancient Andean trader had thought to export Llamas to Central America. Or imaging wagon trains of mammoths pushing East through the Black Forrest – if only early North American peoples had domesticate instead of hunting their megafauna. Or, slightly closer to home, imagine the Spartans (those noble, shirtless and ridiculously abbed warriors of the movies) hadn’t brought Athens’ experiment with science and democracy to a pointy end?

In ‘The Beginning of Infinity’, David Deutsch wants to convince you that history’s failures are really down to two things: a lack of imaginative solutions and, more importantly, a lack of belief that solutions are possible at all. For Deutsch, history is essentially a history of ideas – a millennial long contest between pessimistic status quo versus occasional bouts of optimism where people come to believe progress is both possible and desirable.

Humans, he says, have always faced problems – from how to deal with that saber-tooth tiger to how to grow enough to eat to what to do about rising sea levels. Problems are inevitable. But, the optimistic Deutsch argues, problems are also solvable. That the solutions will themselves produce other problems that require solving is also inevitable. In that sense progress is unsustainable, it will always require human ingenuity to maintain it. But tricky as this is and wrong as it sometimes goes, the alternative is a static society and static societies always fail in the face of a dynamic Universe. Our only hope for unlimited progress (the ‘Infinity’ of the title) Deutsch argues, is an unstable, unsustainable, dynamic society supported by creative solutions.

Deutsch is a genuinely brilliant man though possibly a bit arrogant for some – in places it’s a little bit like being lectured at by the physics equivalent of Dr Gregory House. The reader will spend half their time awed by his intellectual grasp and half muttering to themselves at his obtuseness.

He can dismiss Attenborough, Engels and Jared Diamond in a couple of pages but waffles for chapters about star trek transporter problems or Socratic exposition. He also rambles. The narrative veers between George Washington’s first Presidential veto, animal intelligence (not a fan), the evolution of anti-rational memes, objective beauty and various other -often seemingly unconnected – topics. The points are well worth getting to but the path is sometimes tortuous. Fortunately he provides a paragraph-length summary at the end of each chapter if you get a little lost.

Being a physicist, Deutsch spends quite a bit of time on physics. He dives into the nitty gritty of quantum theory and actually manages to make at least some aspects of wave/particle duality comprehensible. This is no mean feat and I could recommend the book on this chapter alone. He tackles parallel worlds with the Mach-Zehnder inferometer – a literal, tabletop physics version of the ‘communicating with the other side’ trope that’s far more spooky for being real.

All of these detours though, lead – more or less – back to his central theme. Ultimately, Deutsch argues, there are no systems that can prevent disasters, guarantee good policies or scientific truths. We can only judge systems by how good they are at correcting mistakes – removing bad policies, leaders or theories and recovering from disasters. With the right systems that foster creativity and criticism we can solve problems, we can progress and we can do so indefinitely.

Imagine some Andean trader had exported Llamas. Imagine Athens’ golden age had endured. What then? Deutsch has his own answer: “if any of those earlier experiments in optimism had succeeded, our species would be exploring the stars by now and you and I would be immortal”.