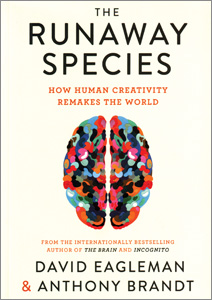 Let’s start with Freckles the Spider Goat and her web fluid. She is not, as you might imagine, a deleted character from an animated Marvel movie but rather the solution to the difficulty of extracting valuable, super tough silk from millions of spiders. Instead, geneticists spliced the relevant spider genes into goat DNA producing Freckles – a mixture of both species who secrets spider silk in milk. It’s the sort of blending of two disparate elements that David Eagleman and Anthony Brandt suggest is part of the trifecta of ‘bending, blending and breaking’ pre-existing ideas that underlies human creativity. In “The Runaway Species’, the authors set out to convince us that art, science, technology, commerce and even the ‘work in progress’ that is human culture, all dance to these same three notes.

Blending and bending examples from science and technology are relatively easy to dig up. “I invented nothing new”, said Henry Ford, “I assembled the discoveries of other men behind whom were centuries of work”. That sentiment is just as apposite for the modern age. Page 37 shows a picture of Apple’s first iPod beside an engineer’s preliminary sketch. They’re pretty similar – size, shape, screen, control wheel etc. Except that the sketch isn’t from Apple’s engineers but part of a digital music distribution system developed by British inventor Kane Kramer 20 years before Apple’s ‘revolutionary’ ideas saw the light of day.

Art isn’t immune to these influences either. The authors recount the work of John Lowes who dissected Coleridge’s library to discover sources for every image in the ‘Rime of the Ancient Mariner’. Lowes claimed that the books of his library ‘rained their secret influence’ on everything Coleridge wrote. That’s not so say that creation can be reduced to some sort of production line system. After all, many artists had access to the same inspirations but only Picasso produced Les Demoiselles d’Avignon.

Cases of ‘breaking’ things to create something new are maybe not quite so prevalent but the authors scare up a reasonable batch of disparate examples. There are airport antenna towers that literally break – folding in two upon impact to avoid damage to overshooting planes. In the arts we have EE Cummings poetry and Bach’s Fugue in D Major (Brandt’s musical influence clearly showing). We also get a brief history of the development of the MP3 music standard, though claiming its inventor ‘broke’ existing digitisation methods by throwing out unused frequencies is a bit of a stretch.

We need to accept risk, to let our imaginations scout far ahead as well as close to home suggest the authors. We need incremental changes and far out ideas to make sure we don’t get overtaken in art, fashion, science or industry. Stick too close to a winning formula and you become Blackberry. Stray too far ahead and you risk becoming the new New Coke. The authors are unabashedly enthusiastic in applying their suggestions to industry but stray uncomfortably close to Zuckerburg’s ‘move fast and break things’ philosophy which has proven to have some less than optimal human fallout. This dark side to constant innovation – the people left behind – barely rates a mention.

The ideas expressed in ‘The Runaway Species’ have their own roots in popular culture. Forty years ago James’ Burke’s ‘Connections’ covered some of the same ideas of interconnectness though Eagleman and Brandt refine and expand them into wider areas. In some respects though their central thesis is not the main draw of this book. The thing that kept me glued to “Runaway Species” was the many vignettes and detours into the backgrounds of their various examples. Whether it’s Einstein’s blouse design, Edison’s cement piano or a 19th Century Elon Musk’s midnight experiments with electric trams, the book is an intensely interesting read with something on every page to keep the science – or culture – magpie engrossed.