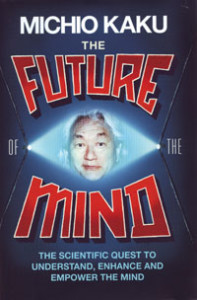 The Future of the Mind
The scientific quest to understand, enhance and empower the mind
by Michio Kaku. Published by Penguin Group www.penguin.com

“The brain” said Woody Allen, “is my second favourite organ.”. If he’d know then what we know now he’d probably have rated it higher. As Michio Kaku points out, we’ve learned more about the brain and how it operates in the first 15 years of the 21st century than in the whole of the 20th and with “The Future of the Mind”, he has rounded up all the current research on the brain/mind in one useful, if slightly verbose, place.

Kaku is something of a rockstar science journalist – front man for several TV science documentaries, go-to talking head for science news sound bites and bestselling author. As such, he gets to talk to a lot of folk the average science writer usually can’t such as DARPA (who have all the coolest – and most dangerous -toys) and gets tours of the MIT media Laboratory. The brain science here is as up to date and as straight from the horse’s mouth as you can get in printed book form.

You won’t find much ‘soft science’ here. Kaku is a physicist and when he says science it’s not ‘psychological experiment’ science, it’s ‘stick electrodes in it’ science. Kaku takes just 60 pages to solve the riddle of human consciousness (at least to his own satisfaction) and introduces a three level scale which frankly sounds somewhat simplistic and will likely annoy the bejeezus out of most psychologists and philosophers (so; useful for something then).

Things pick up a lot though when it comes to the folk Kaku interviews, such as Dr. Miguel Nicolelis of Duke University. Dr. Nicolelis envisions total immersion entertainment (think; holodecks), a ‘brain internet’ and collective consciousness. It all sounds pretty crazy but before dismissing it as a flight of fancy you might want to remember Juliano Pinto, the paraplegic man who used a mind controlled exoskeleton to kick the first ball at the Brazil World Cup. He might have looked like a steampunk Iron Man but the brain/machine interface that made it possible was some of Dr. Nicolelis’ work. He’s not just airily speculating about the future, he’s sitting in a lab building it one circuit at a time.

Controlling an exoskeleton with your brainwaves might sound cutting edge but it’s pretty pedestrian compared to what’s going on elsewhere in brain research. We have robots learning to walk by reading the minds of treadmilling monkeys half a world away. There are mice with recorded and downloaded memories – knowledge literally at the flip of a switch. A robot with the beginning of self-awareness (and that’s just a moral minefield right there). We have induced religious visions from magnetic fields (ditto), videotaping dreams, brain to brain thought transfer and, well, a bunch of projects who’s sole purpose would seem to be to land the outlandish and make the outré ordinary.

On the one hand, a lot of it sounds like the science fiction that Kaku incessantly quotes. Hopelessly optimistic researchers talking up harebrained ideas for grant committiees with practical applications forever decades away. But on the other hand… On the other hand there’s the sneaking sensation that we’re getting a look in on the mind-science equivalent of the invention of the transistor. And just like that work at Bell labs in the 40’s, what we have here is clunky, awkward, Rube Goldberg science, some unknown quantity of which might – in anywhere from a decade to never – utterly transform the human experience.

The SF future, it would seem, is barreling down the tracks faster and more unevenly than anticipated. Not the comfortable ‘carry-on-as-normal’ but with robot butlers and spaceships future though. It’s the complex, difficult, uneasy future that challenges what it means to be human.

You might not be able to stop that freight train of future running you over but with this book you’ll at least have some idea of the cargo.