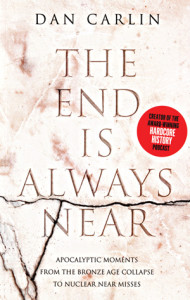 The End is Always Near
by Dan Carlin
Published by William Collins www.WilliamCollisBooks.com

What if the electricity went off tomorrow and never came back on? It would be the end of civilisation as we know it suggests author Dan Carlin. Of course, civilizations have ended before. The Bronze Age collapse laid waste to the epitome of civilistation at the time. The Assyrian Empire, brutal even by the standards of a brutal age, ruled for 2,000 years yet collapsed so thoroughly it was all but forgotten until its modern rediscovery. What does it even mean for a civilisation to ‘fall’? Did Rome fall or just “transition to a more decentralised era with a distinct Germanic flair” asks Carlin? He looks back at these events as well as some of our own close calls to explore the hows, whys and what-comes-nexts of ‘THE END’.

He starts off with a question; does civilisation make us soft? Is it always rough pioneers building what their effete descendants loose – ‘wooden shoes going upstairs and silk slippers coming down’ as Voltaire suggested? Earlier folk certainly had it tougher than today. Parents could expect half their children to die (diarist Samuel Pepys lost all six of his siblings) and if they did live, the children could expect to experience ‘norms’ of physical and sexual abuse that would consign any modern victim to years on a psychiatrist’s couch. Did all this, wonders Carlin, make for tougher societies or just more barbarous ones?

The chapter on Pandemics makes for pertinent – and chilling – reading back here in early February with the Covid-19 virus taking hold. Hope it works out OK for you future folk. Certainly better than for the 25 million victims of the Plague of Justinian 1,500 years ago or the 75 million lives claimed by the Black Death in Europe or the 50 to 100 million people who died from Spanish Flu in the early 20th century (when they knew all about germ theory, disinfection and isolation).

Wars and their moral mutability get a couple of chapters of their own and, oh, how quickly atrocity becomes routine! It takes less than 30 years for the ‘crime against humanity’ of dropping a handful of small bombs onto Paris from a single, rickety bi-plane to transform into the just-another-day-at-the-office of burning 100,000 souls to death in a 1,000 plane bombing raid on Tokyo. The awful irony is that the road to these and even fresher hells are paved by good intentions. But, asks Carlin, if thwarting an evil empire costs megadeaths, how much evil do you get splashed on you in the process? Carlin reports contemporary accounts from victims and perpetrators are, by turns, heart-wrenching and utterly chilling.

One issue is that Carlin doesn’t really have an argument as such and consequently the book lacks focus. By his own admission, it’s just a loosely connected series of vignettes (albeit engrossing ones). His background is as a radio talk show host turned history blogger (mostly the shooty, stabby kind of history) and he tells us he aims for an unbiased ‘what-would-a-Martian-visitor-think-of-all-this’ viewpoint. I don’t think he quite makes it. For example, the closest we’ve come to extinguishing ourselves by nuclear war (on purpose anyway) is the Cuban Missile crises. While Kennedy doubtless deserves credit for resisting his advisor’s earlier unanimous recommendations for the use of nuclear weapons, some historians believe he prolonged the crises for political capital. There’s no hint of this controversy in Carlin’s ‘Kennedy-the-hero’ take on the subject.

We tend to act as if we are impervious to the sort of historical collapses explored here but that’s just what their citizens thought before they were ground to pulp in the gears of history. If there is a take-away from ‘End…’ it is, to quote Carlin’s dad: “don’t get cocky.”