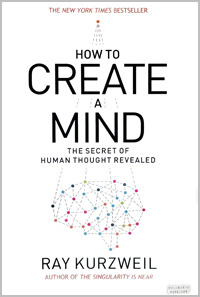 How to Create a Mind
The secret of human thought revealed
by Ray Kurzweil. Published by Duckworth Overlook www.ducknet.co.uk

Count to a trillion. That may take a while so in the meantime let me tell you about LOAR and Ray Kurzweil’s argument that it will help us reverse engineer the brain and build intelligent machines within a couple of decades.

In ‘How to Make a Mind’, Kurzweil – futurist extraordinaire, de-facto prophet of the Singularity and computer entrepreneur – weaves together brain research, advances in computing and breakthroughs in software. His central tenet is ‘LOAR’ – the Law of Accelerating Returns. One way you’re probably already familiar with LOAR is in the shape of Moore’s Law – the 18 month doubling of computing power that’s held since the ‘60’s. In fact, claims Kurzweil, information technology price/performance has been on an exponential upward curve since the mechanization of the US Census in 1890 and the curve has held steady through every boom, bust and war. No sooner has a ceiling been suggested than some left-field technology bursts right through it.

There are a lot of graphs here trending up to the right on everything from processor speed to complexity of brain simulation. Of course it’s easy to plot existing data, extend it and ride that dotted curve to any future you want. My inner curmudgeon can’t help but add “past performance is no guarantee of future growth”. My inner curmudgeon isn’t alone and technological luminaries such as Paul Allen (co-founder of Microsoft) have disparaged Kurzweil’s views. Kurzweil dismisses these arguments as ‘criticism from incredulity’ and with a 90% plus hit rate for his technological prediction over the last 13 years, he may not be the man to bet against.

As he points out, people closest to the issues are often not the best to ask for predictions. If your day job is face to face with a problem tree then you can’t see the whole forest. Engineers struggling to make micron sized integrated circuits 30 years ago couldn’t imagine the nanometer sizes chips of today. The human genome project took 7 years to sequence the first 1% of the work but trumped critics by taking only another 7 for the remaining 99 % thanks to exponential growth in information technology.

Kurzweil leans heavily on his own work in voice recognition (with a little product placement thrown in) and though interesting in it’s own right, it is – along with the early chapters on pattern recognition in the neocortex – perhaps too exhaustive for the casual reader. An expanded chapter on other researcher’s work in brain simulation might have made for a better overview. There are extensive notes and links though so interested parties can explore further on their own.

Many notable figures have expressed reservations about intelligent machines and while Kurzweil doesn’t specifically address these issues, he does seem to suggest that while we can put consciousness in the machine we may prefer to put the machine in the consciousness. Computing power that forty years ago filled a building now fits in your pocket. In another twenty five it will fit in your blood cells and your mind will expand into the cloud. Personally I’m not sure this last part would be a good idea. I don’t trust the cloud with my email never mind my mind. Who wants a ‘buffering’ message when you’re trying to remember where your keys are?

Did you get to a trillion yet? If you’d counted exponentially you would have got there before you knew it. Before we know it we may have consciousness in our machines. As Kurzweil point out, consciousness is a continuum not an either/or proposition and it will probably start out small. Let’s hope we recognize it in time and not find ourselves in the dock in 30 years facing an AI prosecutor charging us with murder for turning our computers off tonight.