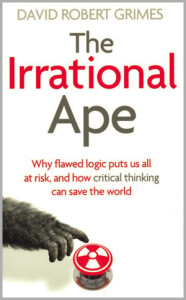 Frankly, it’s not looking good for us apes in ‘The Irrational Ape’ by physicist David Robert Grimes. After a strong start courtesy of a couple of Russians you’ve never heard of who saved the world, things go downhill fast. One of the very many low points would be the mathematician Hippasus of Metapontum who, according to legend, was drowned as punishment for discovering irrational numbers. Not by an ignorant mob mind you, but by his fellow Pythagorians (yes, the triangle guy, also religious nut). If mathematicians can’t be logical, what hope do the rest of us have?

Grimes does his best to boost our chances. He starts off with a quick rundown of the steps needed to formulate a reasoned argument and the subtle – and not so subtle – twists of logic and retoric that give the veneer of creditability to hollow or emotive positions. Then he rounds up the usual suspects that scupper our thinking. There’s perennial favorites like echo chambers, confirmation bias and false dichotomies (the with-us-or-against-us ruse popular with demagogues from Lenin to Bush). False memory syndrome makes our memories more Wikipedia than Britannia and manipulated statistics show that dressing as a pirate alleviates Global Warming.

If the book feels familiar it’s not just because it reuses the gorilla hand graphic from Brian Cox’s ‘Human Universe’ for it’s cover. The absences and errors of logic that “hammer nonsense into narrative” have been covered by many previous writers. When I started reading I was unsure that we needed another reminder of the problems but the book provides plenty of motivation. Perhaps we need it because a study of 126,000 internet news stories between 2006 and 2017 showed that ‘falsehood diffused significantly farther, faster and more broadly than truth’. Perhaps it’s because bloggers who claim airplane air is dangerous since it’s not ‘pure oxygen’ can get to No.1 on the New York Times bestseller lists. Most pressingly it might be because the Internet’s promised democratisation of information has instead evolved, as Grimes describes it, into weaponised disinformation. ‘Outrage machines’ pander to the voluntary Balkanization of public discourse by generating pantomime villains & heroes and the comforting illusion of understanding (along with, of course, lots and lots of revenue producing clicks).

And, not least, perhaps we need it because Grimes is a clear and engaging writer with a lovely turn of phrase and personal experience countering anti-vaxers, conspiracists and climate deniers. He also fills the book with plenty of funny / disheartening / heartbreaking examples of tragic error, forehead-smacking-idiocy and outright chicanery to keep the reader entertained.

The only real problem with ‘The Irrational Ape’ then is that it’s destined for an echo chamber of it’s own. Any readers will already consider themselves pretty reasonable. They’re not, obviously. You’re not, I’m not. Even a cursory examination of our own motives reveals exactly the sort of glaring errors in logic and motivation Grimes describes. Books like ‘The Irrational Ape’ can help us get better at countering them but I suspect we’re the wrong market. Some of you reading this are teachers of all stripes from Montessori to tenured Professors. How difficult is it to develop a standard curriculum to teach the basics of how to think? Maybe some simple rules for primary students, funny examples to keep the attention of bored secondary classes, elementary statistics for college courses in business, finance and – especially – politics. The basics of how to reason (or, at least, recognise when others aren’t) should be as ubiquitous at all education levels as our ABC’s and 1,2,3’s. A fourth R to add to the other three. If we are to become even slightly more rational apes, it will have to start (and I apologise for laying this extra burden on your shoulders) with you.