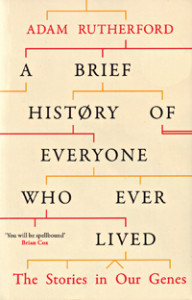 A Brief History of Everybody Who Ever Lived
by Adam Rutherford
Published by Weidenfeld & Nicolson www.orionbooks.co.uk

Christopher Lee claimed to be descended from the Emperor Charlemagne. According to geneticist Adam Rutherford in “A Brief History of Everybody Who Ever Lived”, he was quite correct. Unfortunately that’s not as impressive as it sounds as you and everybody else is also descended from Charlemagne – and Charlemagne’s stable mucker-outer as well. In fact, Rutherford says “Everyone alive in the 10th Century who left descendants is the ancestor of every living European today”. Over the course of history the threads of our heritage cross and re-cross like the tracks of an ice skater and it takes only three thousand years for everyone to be descended from anyone in history. This new and complex picture of human heredity is being revealed by the latest genetic investigation techniques and Rutherford does his best to untangle the how and why of what’s turning out to be less of a family tree and more of a Gordian knot.

Sometimes those skater’s tracks I mentioned cross too closely and they fall through the ice. As a cautionary tale Rutherford recounts the story of the Spanish Hapsburg dynasty that took the idea of ‘keeping it in the family’ a little too literally so that grandmothers and great-grandmothers were often the same people. Don’t get the idea that inbreeding is limited to royalty though. A quarter of the 2500 Britons in a 2015 survey classified as inbred to some degree. Mostly first cousins but parent/child, brother/sister and uncle/niece offspring were all represented (Icelanders – with their tiny genetic base – actually have an App that helps them avoid that genetic tripwire).

“Scientists discover a gene for X” is a headline you’ve probably seen a few times. Unfortunately it’s mostly fiction. At best, Rutherford informs us, scientist discover a gene which, in conjunction with other genes and the environment, might predispose people to X to some degree. A slightly less sexy headline to be sure. He’s equally happy to debunk the claims of ‘find your ancestors’ gene search companies. Sure, one of your ancestors may have come from a fishing village on the banks of the Danube a thousand years ago but a thousand years ago you had a million ancestors. They came from everywhere. The book absolutely blows away the myth of ‘pure’ bloodlines. The traits we associate with race – skin, hair, eyes – are superficial and transitory. We are a mongrel species (actually several species since we contain a pinch of Neanderthal and a dash of Denisovan among others) and to a geneticist an appellation like white or black “is no more a race than ‘long distance runner’” says Rutherford. It’s a useful and apposite lesson even if Rutherford bangs that particular drum a little too loudly in places.

To show just how recent these revelations are Rutherford includes a photo of a bet geneticists took in 2000 – just as the Human Genome project was getting going – on just how many genes the human race would turn out to have. All are vast overestimates. It requires many more genes to create the humble banana than a human being. The Human Genome project may have produced zero cures for genetic conditions but that wasn’t the point says Rutherford (yes, yes it was) but it’s provided us with a window into a vastly wider genetic world. Everything is connected to everything else, genes influence each other in subtle and complex ways, environment impacts how those genes are expressed across generations and promising early successes in finding single genes for disease such as cystic fibrosis turn out to have been fruit so low hanging it was practically on the ground.

This story of everybody who ever lived is turning out to be quite a bit more intriguing that anybody had thought. “A Brief History…” not only tells you lots of cool new stuff and shakes up what you thought you knew but it makes you think about it afterwards.