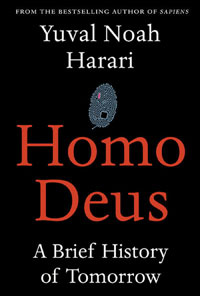 “Everything that irritates us about others can lead us to an understanding of ourselves.”
Carl Jung

Ah, that difficult second album. Or, in this case, difficult second book. ‘Homo Deus’ extends Harair’s earlier work on humanity’s past into a history of the future. Sort of. Historians don’t necessarily make great futurologists (but then neither do futuroligists) and despite Harari’s brilliance ‘Homo Deus’ is a little like eating the best ice cream in the multiverse sprinkled with the occasional fly.

Harari is a big picture sort of guy, at his best with the grand sweep of history but he falters on smaller scales. ‘Homo Deus’ is an infuriating read for those of a Humanistic/liberal disposition (and perhaps even more so for those of the theistic bent). After careful consideration I think the problem is with his definitions. For Harari ‘religion’ is any belief or value system. Christianity and Communism differ only in the details. His caviler hijacking and re-defining of categories is tremendously irksome. I nearly spat out my tea when I read that Humanism is “the worship of man” (probably the only thing Humanists would agree it isn’t). However, just when you think he’s lost the plot entirely he’ll go and say something insightful to keep you reading. If you can get past these – fairly major – hurdles you’ll find arguments which will probably make you uncomfortable but which you might, if you’re being honest with yourself, grudgingly come to accept have some merit.

Humans, Harari argues, are in danger of “losing their value because intelligence is decoupling from consciousness.” The broadly liberal / western system of values is just one more belief system no different from thousands of extinct predecessors in human history. It sprouts not from high-minded ideals but from a rich economic substrate. As economics jerks and judders into something unprecedented during the 21st Century perhaps so too will our values and morals. We are destined to fall, he suggests, not to the straw men of regressive theology or intolerance but to a ‘new religion’ of Dataism replacing the moral value of people with the moral value of information alone.

‘Homo Deus’ is certainly more challenge than comfort to the currently beleaguered ideals of any flavour of liberal humanism. It may seem like I’m just adding another rock to an already floundering ship in recommending this book, so why am I? Because we got complacent.

Civilisation is on the ropes, reeling from a series of body blows dealt by a resurgence of racism, isolationism and intolerance. In a fight we thought we were slowly winning, we now see we may really loose. It’s comforting to see the other guys as fueled by fear and lead by bigots and buffoons. In the immediate sense that may even be true but further back, they are themselves, Harari points out, being driven by the sort of inexorable historical momentum that’s pushed previous societies to ruin. Harari is certainly no fool or bigot. He espouses the values of a liberal civilisation while challenging their mechanisms and mandate. You’ll find no comforting echo-chambers here, just a smart, eloquent (if faintly sneering) author writing things that will have you muttering ‘that’s ridiculous’ under your breath on the commuter train (and, at least, gaining some additional seat space thereby) as you mentally marshal counter arguments.

‘Homo Deus’ is an irritating book. Its value lies not in its predictions of a particular future history – even the author admits that’s a fool’s game – but by compelling the reader to argue. By showing that our current values are not inviolate or historically inevitable ‘Homo Deus’ challenges us – perhaps not always in the manner Harari intended – to take a wider view, see past the immediate issues, and exercise the atrophied skill of defending (or amending) our principals in the face of oppositions more relentless, far-ranging and implacable.