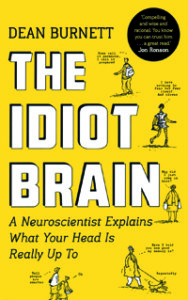 Here’s a tip. If you have to tell a joke, make sure you tell it to a bunch of people together. According to Dean Burnett in ‘The Idiot Brain’, people are 30 times more likely to laugh in a group than alone so that clever quip that’s greeted with a stony silence one-on-one will have them rolling in the aisles en-mass. That we should find humour in groups we never would alone is one of the brain’s many hiccups, mishaps and glitches that Burnett sets out to explore.

We can’t really blame the brain for it’s little foibles though. It’s doing it’s best to guide us through our complex modern lives with a self-assembled patchwork of junkyard mental machinery designed for completely different uses. After all, says Burnett, the first fish to crawl out of the sea wasn’t racked with self-doubt and thinking “This is the last time I play truth or dare with Gary”. As you can tell from that line, ‘The Idiot Brain’ is not a serious and somber account but rather firmly wedged at the popular end of popular science. That’s not to say it’s shallow. Burnett is an honest to goodness neuroscientist with letters after his name and everything – but the science is snappy and couched in a folksy humour. It’s the titchiest bit forced in places but mostly evokes a genuine smile.

The book is stuffed with plenty of entertaining and informative snippets in chapters on fear, intelligence, personality and more. Sleep is a prime topic where we have more questions than answers but some intriguing hints. For instance; we don’t sleep because of exhaustion. The metabolic activity of the body drops only 5% while asleep. Even hibernating animals enter a sleep state and actually use more energy to do so.

Then there’s memory. Burnett likens it to a computer but it’s not a computer you’d want to own. It erases or alters random files, runs everything through an ego filter to inflate self importance and flashes up your stash of Care Bear erotic fan fiction at the most inopportune moments. Unfortunately we can’t turn ourselves off and on again to fix this problem. We also have a working memory so small it would have embarrassed the boys at Bletchley Park. In compensation, our long term memory is tremendously good at storing stuff though recall seems to be very context dependant. Learn something while in a scuba suit under water and you might have to go diving again to remember what it was.

After a little bit of a slow start with a chapter on seasickness, Burnett races over far more mental territory than I can go into here. For example, he explains what all six of your nervous systems do, why you can remember everything about that old school friend except their name, why really smart people can do really stupid things (you know who you are), why ‘heads-up displays’ are a bad idea for pilots,… golly this is a long sentence isn’t it? Don’t worry. We’re nearly there…the rocky foundation of personality testing, why you’ve never heard of a ‘comfort salad’, how anger is good for you, why group polarization means that, ‘yes, we are all individuals’ and that ‘normal’ is more general consensus than fundamental fact.

‘The Idiot Brain’ is everything you want in a light science read – clever, funny, engaging and stuffed full of intriguing facts and the latest (occasionally clashing) theories. The information is fresh and bite-sized wrapped for even the most casual of armchair scientists but don’t worry if there’s something you don’t understand. As Burnett points out, your brain will make sure you’ll remember that you did.